It’s been a soaking wet week this week.  A spattering of intense rain storms has cooled the weather off, making it possible to move fast enough to work in the garden.  I think that’s why nothing gets done down here in the South like it does up North.  It’s too hot to move most of the time.
The first tomatillos are ready!  They really took me by surprise this time, and if my children had not been on top of what’s ready to pick, I might have missed them entirely.  It’s so useful to have eaters helpers in the garden.  They were a big relief after so many months of greens and winter vegetables. 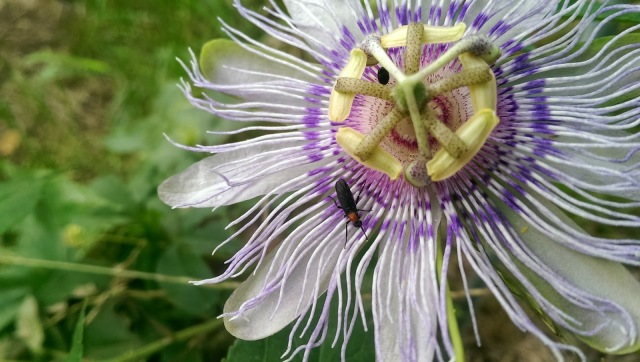 We’ve been finding a lot of wild passionflower vines popping up in the garden along the “tropical” garden beds – planted with bananas, taro (malanga), cassava (yuca), tumeric and ginger.  It’s funny, because we were contemplating buying passion vine seeds when we were ordering.  I’m glad we didn’t.  Ethan is building trellises for them to climb on.
There is a wonderful patch of passion vines in a clearing on the driveway made a shocking number of fruits last year.  There was even one on the garden fence last year, but something ate all the fruit before they were ripe.  Raccoons and possums must be immune to belly-aches from unripe fruit.  They seem to live off of it. 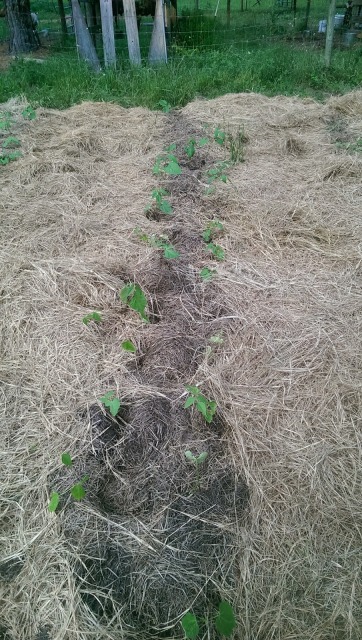 This is just a picture to show that I finally got around to planting my beans.  It’s the only part of the garden I feel confident in sharing a picture of.  The rest of it is nothing to be proud of.  I looked at pictures of last year’s garden this time of year, and the rye was golden brown and lying flat like hay on the ground between the beds.  This year it is towering above everything, very weed-like, and going to seed.  Once I get everything planted, I will go along and make paths with the cow’s strewn-about hay leavings, or at least in my mind I will.  It’s very possible it will never happen, but I am hoping to load up another trailer-full of old hay and truck it down to the front of the garden this weekend.
There were a lot of experiments this spring.  I tried a solar-only cold frame, which I think would have worked if there wasn’t a huge rip in the side plastic.  With Clothilde running around, I never got a chance to repair it, and it was never warm enough for the hot peppers to sprout.  Another discovery was that the flats work well enough for tomatoes and peppers, but none of the curcurbits thrived.  It downright killed the melons and squash.  Now I remember reading that melons, pumpkins, and squash do best if direct-seeded, and I could never understand that, because the tender sprouts get munched up very quickly in my garden.  I’ve always started them and put them out once they have some true leaves, but I’ve started them in plastic Soho cups, which gave their roots much more room.  I was trying out the fancy, expensive flats from Johnny’s Seeds, but I am going back to my junky-looking cups next year.