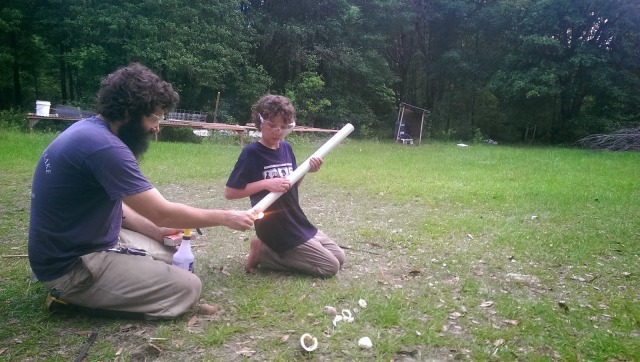 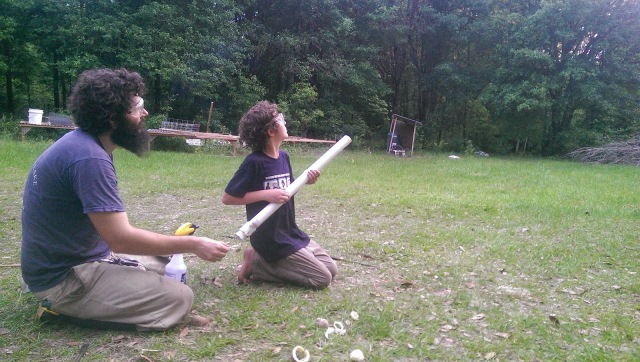 For an April Fool’s joke, Ethan told Mirin that he would get him a bazooka if he watched the baby while we did the chores.  Mirin hardly ever watches the baby, so this was a big request.  There’s a family joke that he needs a t-shirt that says, “Big Brother Ain’t Watching You” with a picture of a baby sticking a fork into an electrical outlet.

Two hours later, Mirin was still watching the baby, and Ethan started to feel slightly guilty that he was going to have to break the news that he couldn’t actually get him a bazooka.  Then he thought about making a potato gun.

This was right along the lines of what would be guaranteed to evoke serious enthusiasm among the 10-year-old boy part of our family.  Earlier in the year, it was muzzle-loading rifles that he talked of non-stop, causing Rosie to cover her ears shout, “Just shut up!  I’m so tired of hearing about your stupid guns!  Shut up!” which was what the rest of us had been thinking, too.  Lately it has been The Slingshot Channel, which was perfect because I had been losing my steam with our Earth, Water, Fire, Air lessons we are supposed to be working on for 4th grade.  He’s been hard at work every spare minute that he is not required to be picking up his laundry or head-scratching over multiplying fractions making various trigger mechanisms and carving cross-bow handles.

The potato gun took some trial and error.  It’s basically a length of PVC pipe with a removable cap at one end.  A spritz of denatured alcohol, the cap is quickly screwed on, and a match is held beside a small hole by the back.  It was surprising how fast and far it could go, and was a fun home school project.