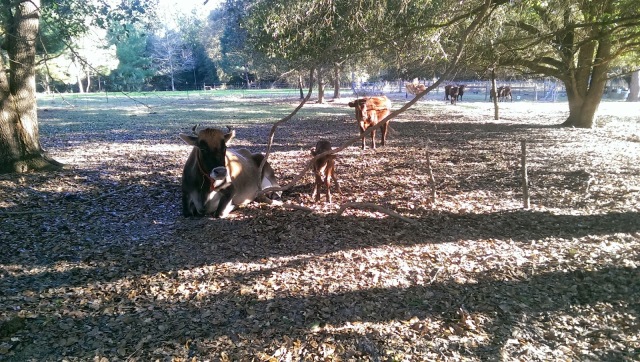 Matilda’s baby was born on Tuesday afternoon!  As usual, we got there just after she was all licked clean and was on her feet.

She’s a pretty, friendly calf, although I am hesitant to be too enthusiastic.  You see, Explorer is her father, and he’s Matilda’s calf from two years ago.  Either she’s line-bred or she’s in-bred….we’re not sure which yet.  The truth is, we were hoping she would be a boy for beef (Matilda has only had boys on our farm before!).

So far she’s the friendliest calf we’ve ever had – while I was milking Matilda’s huge udder to give her a little relief from all the milk she has, the calf came right over and was nuzzling my face.  She let Ethan pick her up and carry her back to the herd (she couldn’t quite figure out how to follow Matilda through the gate yet).  She looks exactly like Lichen, only more unsteady on her feet.

We also weaned Nutty this week, which means we’ll have cow milk again!  Although at this point, I can’t even taste the goat in the goat’s milk.  It just tastes like milk.  When you switch animals you get a shock of a different flavor.  The year before last this happened, and I had to get used to the overwhelming flavor of cow in cow’s milk.

Nutty is huge at this point.  He has really grown up and filled out.  He’s very roly-poly and has about eleven chins.  He’s quite the mischief-maker.  The day we weaned him, I think Chestnut was in heat again.  When he wasn’t nursing, he was trying (and failing) to mount her and everyone else.  He even tried mounting Matilda’s new calf (it’s not sexual at his age, more of a playful thing).  That was what decided that it was time to separate him.  It’s hard enough being born without an annoying older sibling trying to dominance mount you two hours later.

He’s not on his own, though.  We left him in with Sampson, his best buddy.  Sampson was getting picked on by some of the big mamas, and had horn marks on him.  He’s thin because they never let him eat enough, and he needs copper.  I’m hoping to drench him with extra copper while he’s separated.  And he and Nutty love to play together.  I remember Sampson was an obnoxious little thing when he was little, too.  Those boys, they are so rambunctious.

Explorer, while he has long-outgrown his playful youth, has gotten more and more bully lately.  Now that his big rival Meathead is out of the way he has lost his weak and hopeful look.  He usually stands around, tail up, brushing himself occasionally with dirt to make his muscles look bigger.  He exudes confidence and keeps his eyes half-closed with a “Hey baby,” look in them, like a model in a men’s magazine.