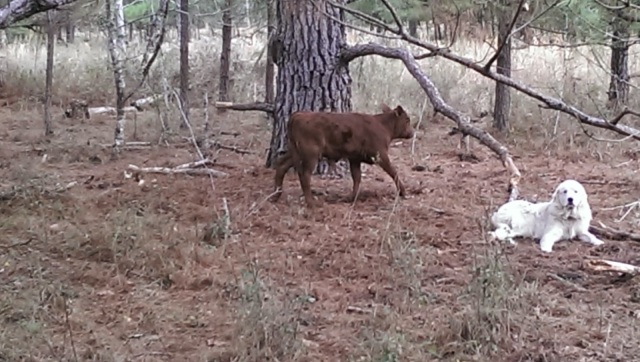 The holiday is at an end – here we are, back to the grind of home-schooling.  Not that it is particularly grind-like, but at times I’ve made it that way for myself.

Nutty is out with the herd at last, and seems to be enjoying it.  He and Sampson are great buddies.  I thought surely Sampson would pick on him, but they are always together, playing and grooming each other.  There was one sweet day when they were curled up napping one afternoon in a bed of soft fallen hay around the hay ring.  And Matilda, for once, has been shockingly nice.  I haven’t seen her kick him once.  I wonder if he smells like her son, Explorer.  He is her grandcalf, and she seems to know.  He has also surprised us by staying in the electric fence.

The day we moved everyone out, he ducked under the brain-cage of un-electrified wire and was running all over the place.  We had quite a time getting him back with everyone, and meanwhile he got a nice, sharp shock on the nose when he was trying to jump through the pig fence.  It seems to have been a “teachable moment.”  He hasn’t gotten out since.

Flora appears to be pregnant, and Geranium as well, although the dates we wrote down don’t seem to be correct, so who knows when new babies will appear.  It looks like it’s going to be an exciting spring.