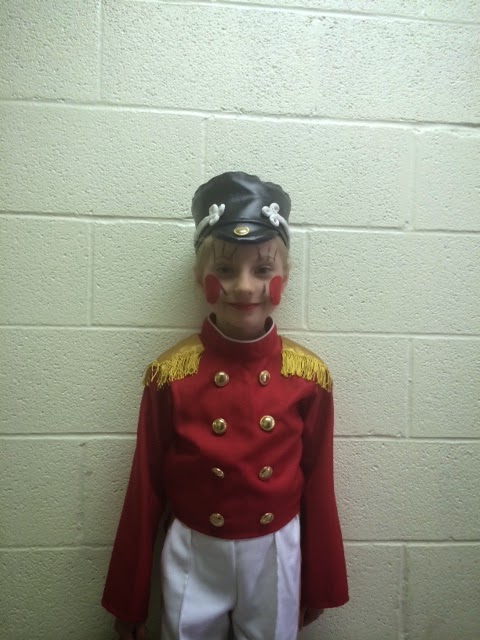 Rose’s last ballet performance was yesterday.  It was an intense week with five performances, two on one single day.  She loved it, but it was hard on her, too.  It was wonderful to see how happy she was to be in a real ballet, but a relief now that it’s over.  Her poor cheeks are all red and chapped from having to pull the red cheek stickers off five times now.  It’s good there wasn’t a sixth performance, or she might not have any cheeks left at all.

We had a funny thing happen on Friday when we all went to see the show.  Ethan, Mirin and I dropped Rose off backstage to get ready.  We were walking around to the front of the theater when a tall, thin guy elbowed us aside and rudely marched ahead to a vehicle, slamming the door shut behind him.   Seconds later he was roaring through the parking lot, and we had to dive out of the way to avoid being squished.  He barely tapped his breaks at the stop sign, and ripped away like a NASCAR driver.  We made speculations about why he was in such a hurry that varied from “he really had to go to the bathroom,” to “one of the ballerinas needs a sandwich.”

Imagine our surprise when we sat down in the theater and an hour later the curtain opened, and there he was on stage!  We were like, “Hey, there’s the guy who tried to run us over in the parking lot!”  So maybe he forgot his tights or something.

Apparently this year was a difficult one for the company.  There was a major mix-up with the music at one point, and on Saturday’s performance the Mother Goose fell over on stage.  Luckily he (it was a Mother Gander this time, and it happened to be the same guy who tried to run us over in the parking lot – karma?) didn’t squish any tumblers, and they managed to carry on while the dance director struggled with the large skirts and the wheeled platform Mother Goose glides around on.

Rose did her part beautifully, and we are all so proud of her.  She was one of the smallest dancers on stage.  She says she can hardly wait for next year.