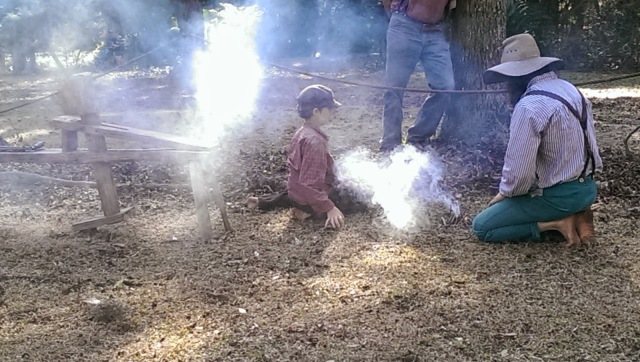 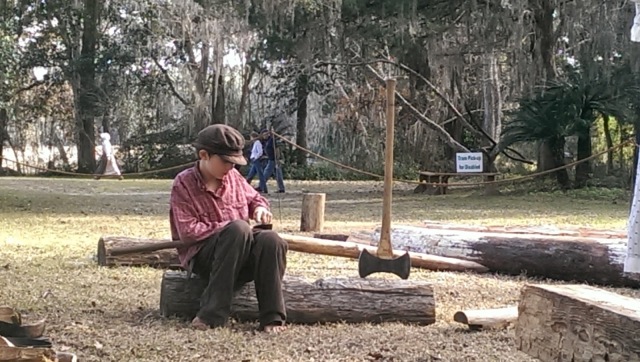 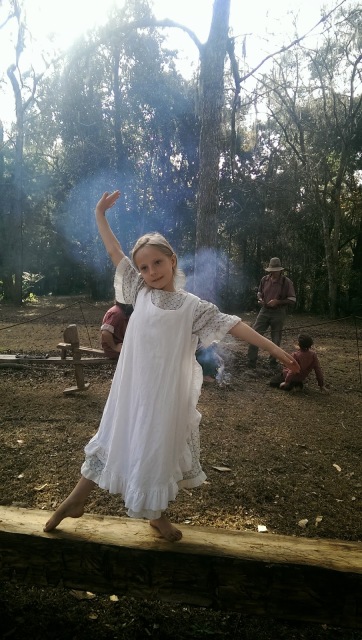 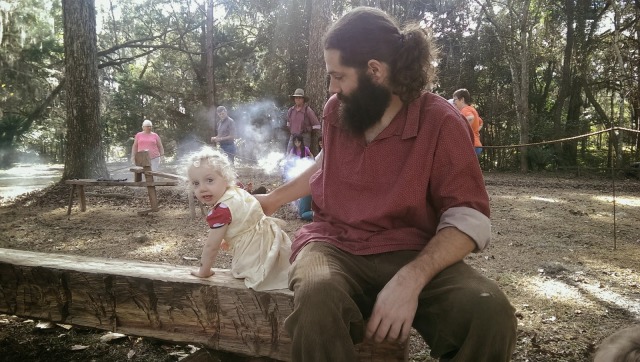 We had a great time again volunteering at the Dudley Farm cane boil on Saturday.  Ethan and Mirin helped our friend Willie to hew beams out of logs.  Rose practiced ballet on the finished beam.  Clothilde “helped” by running towards whoever was chopping with the ax.  She did help Willie move the split rails around, too.  It was all we could do that morning to convince her to put on a more Victorian-style toddler dress over the Minnie Mouse dress she has become very attached to.  There was no question of her taking that dress off.  It is practically a part of her now.  I sat in the back and knitted, and everyone asked about the knitting I was demonstrating.  I had to explain I was actually just there to help keep an eye on the children.

The first big triumph of the day was to actually pin down the staff and get a bunch of their corn seeds to add to my stash – but more on that later!

It’s different there now – the energy is different, there are very different volunteers.  They used to keep a supply of corn (that they had grown!!) for the chickens, and so they had the children help to shuck and shell it.  Rose would spend an hour over there helping out with that.  Now that they are buying corn, they are very stingy with it.  They only let the children shuck and shell one ear each.  It was funny because the slightly obnoxious volunteer who was helping the children with it said to Rose, “Imagine if this was your chore for the day.”  I didn’t mention that actually, some times during the year, it is a chore for us.  Rose was very disappointed, so we went to the old hand-pump well where the children enjoy pumping the water.  They had an old volunteer posted as a guard to make sure the children ONLY pumped TWICE.  Did they think it was going to drain the aquifer or something?!

They were also appalled that we all insisted of drinking the water.  It’s been a few years now since they hung up a sign that says the water is non-potable.  We find that to be nonsense.  The water is just as potable as it was ten years ago when everyone drank it.  It’s not treated with chemicals, so they feel like they have to say that, for liability reasons.

In the late afternoon we helped Willie re-load the logs onto his trailer and went to do the chores.  It was dark when we got home, tired but enthusiastic after a fun day.  We were hoping to be in bed early.  But then my mom called.  Willie had stopped by the natural food store on his way back through town, and noticed their refrigerated section was empty.  On inquiring about it, he was informed it had stopped working the night before, and all the food legally had to be dumped.

Wille ran out back and started phoning people to come help pick up the food for the Earthskills gathering.  Apparently it is traditional to feed the work/trade people on only dumpster-dived food.  Ethan, with his truck, was drafted in by my mom.  He took the children, because how often do kids get to go dumpster diving with their parents like that?

At the dumpster, things were exciting.  Willie was like a dispatcher, calling more and more people to the scene.  My mom was heard to say, “This is even better than 10% off day!”  Some experienced dumpster divers showed up on the scene, outfitted professionally with rubber gloves, rubber boots and head lamps.

A herd of vegans descended and helped sort out all the gross fake soy foods.  It was like a dead wildebeest had turned up on the Serengeti, and the scavengers peacefully occupied different niches.  They were disappointed there weren’t any Tofurkeys or anything, but were cheered by finding vegan sushi.  There was tons of Earthbalance, and the Earthskills crow gladly handed the stuff over to them.  At one point they tried to hand over another stack of it, and the vegans hesitated before replying, “You know, I never thought I’d say this, but I think we have enough Earthbalance.”

Everyone was slightly appalled at the food waste, and the fact that the store hadn’t called a food bank before chucking it in the garbage.  (Having worked in food service, I’ve seen the waste of good food firsthand.  That’s why I have such a hard time believing the arguments about feeding the world.  We have LOTS of food, and here, lots of it is thrown away).  It was all still cold, too.

My mom and Ethan got lots of fancy cheeses, perfectly good eggs, yogurt, expensive organic hot dogs, and sausages.  Mirin has been in heaven eating little fruit yogurts that we never buy.

It was by far the most exciting end to a Dudley Farm Cane Boil.