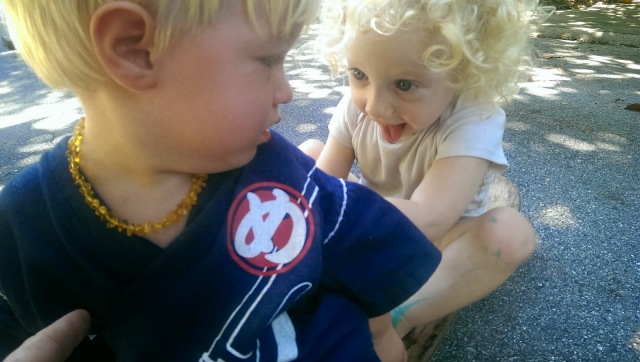 We had some friends over on Wednesday, and it took Clothilde a little getting used to not being the littlest one for a few hours.  It made me realize that it is slightly unhealthy to be the littlest of several children – everything always revolves around her.

Today is our last weekday of our summer vacation.  I’m feeling a little wistful, but I think the children will be glad to get back to homeschooling.  They have had an extremely boring summer this year, and mostly spent it pining for “screeeeeen tiiiime” (you have to whine when you say it) at my parents’ house next door.  I was hoping they would have spent it exploring outside and doing creative projects, but no.  Screens are just so addictive.  I know, because I’m sitting behind one right now.

I’ve been working my way through The Teenage Liberation Handbook, which is written for teenagers interested in unschooling.  It’s good. I like it.  I wish I’d had it when I was in high school – especially my dismal senior year when I had to drop Latin III so I could take stupid Life Management Skills.  Dumbest class ever.  Every day we had to watch movies about abstinence only, beer is a gateway drug, and if you have relationships before you’re 30, your boyfriend will probably murder you (that was actually a movie plot).

The TLH is beyond Mirin’s reading level at this point, but I thought he would really enjoy it if he could read it.  I thought the whole unschooling thing would be just for him.  But when I asked him about it,  he said he prefers to be “spoon-fed things,” which worries me a little!

We definitely don’t unschool, as I have always been interested in Waldorf education, which seems very different.  It can be strict and scheduled, especially in the Christopherous curriculums I bought after Clothilde was born because I knew my brain wouldn’t work at all with a small baby.  This past summer I read more of Steiner’s actual lectures/writing about education, and I think he would have been all for unschooling.  I think his ideas were taken and developed by other people and have gradually changed with pressure from achievement-oriented parents.

Last year I had a lot of anxiety about what we were doing all the time.  That was because the year before our homeschool evaluation did not go very well at all.  It was just me and all three children, and I could barely talk to the teacher or even remember what we had done because Clothilde was ravaging the classroom we were in, which was full of little baskets of various school supplies at baby height.  I had to keep pulling her out of the disgusting trash can.  It was awful, and the teacher asked us pointedly if I thought we had done very much.  I pulled Clothilde out of the trash can again and answered that we had done as much as we could!

This past year I had Ethan come along, and we left the crazy toddler behind with grandparents.  It went so much better, especially because I had written an very detailed plan of what we were theoretically accomplishing every day.  Of course it didn’t all happen, but that’s the same with regular school.  The teacher loved it and didn’t give us any problems at all.  This year I also made a very detailed plan, but I thought we would just work on it how it suits us.  The Norse myths, Zoology and all the first grade stories I’ve been really looking forward to.  There’s always so much to do, but I’ve found that less is really more in many ways when it comes to education.