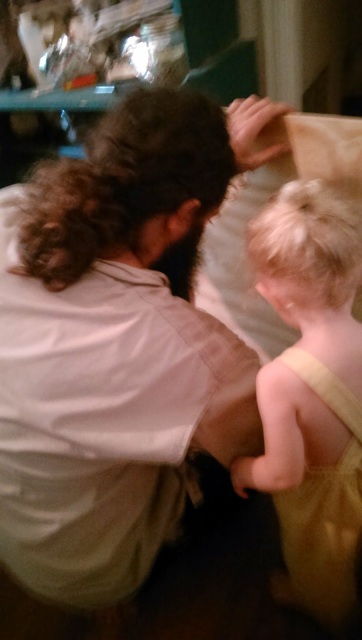 Having older kids and then a new baby, it was hard to remember what it was like with child-proofing.  I don’t know that I even did any childproofing.  I didn’t need to.  All the fragile knick-knacks were put away, but that was it.

So childproofing was far from my mind when I moved my herb and spice shelf into the dining room for easy access while I was about seven months pregnant two years ago.

Then Clothilde was born.  As soon as she could crawl, the spice shelf became one of the favorite places to ravage.  We moved everything up to higher and higher shelves, until everything was piled as high as possible.

Last week I was working on a blog post of all things while Clothilde played.  She went out into the dining room for just a minute, and returned covered in cinnamon and asking to wash her hands.  I went out, dreading what I was about to see, and found the dining room was covered in cinnamon.  It was on the table, on the chairs, on the floor, in her hair.  A real mess, but it could have been so much worse.  It could have been cayenne pepper or turmeric or asafoetida.  At least cinnamon, being a bark, blended in discreetly with the wood floors and smelled very nice, and Clothilde smelled very nice.

I called Ethan at work and begged him to finally put the doors on the spice shelf that I’ve been asking about since Clothilde was six months old.  I told him I didn’t care how ugly they were, I just wanted something that could be tied shut.

He managed some pieces of plywood and hinges on his way home.

Clothilde got very excited about the power tools when he was working.  She helped during the whole job.

But how long until she figures it out?