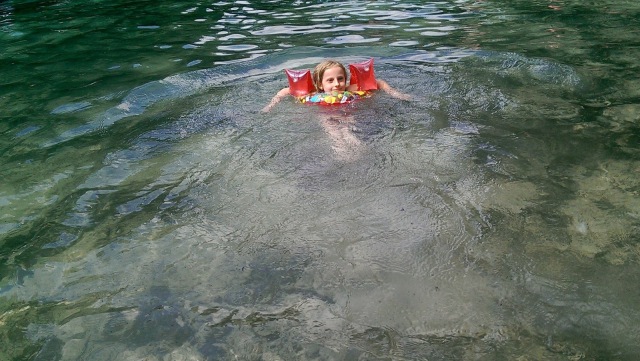 Rose’s preschool had an end-of-year outing to Blue Springs on Friday.
I hardly spoke to my older children, they were so busy playing with friends and swimming in the beautiful, unbelievably blue water.  We found the Morning Meadow pavilion easily, despite the fact that no one was actually there at the time, because we spotted the fair trade baskets, organic corn chips and a Maya wrap.

I like the way Blue Springs has shade over the water – very good for my extremely fair, not-really-for-Florida complexion.  There are several springs there.  For the first time we floated down the second spring run that joins the first.  I found a beautiful piece of flint on the bottom.  There were apple snail eggs on the cypress trees and beautiful flowers blooming on the edges of the very clear water.  There is even a long, Dr. Seuss-like boardwalk down to the Santa Fe river.  They have replaced sections of it, but some of them are only held up by cables to keep the whole thing from keeling over into the spring run.  But other than Rum Island, it is my favorite springs

Unfortunately it is privately owned and very expensive to get in.  There is also a certain expiration time, the same as at Rum Island.  It was very nice when we first arrived, but after 2pm it becomes the “Redneck Riviera” and you end up seeing and hearing things you really wish you hadn’t, like people cursing at and threatening their children, babies/small children being fed oddly colored, very unwholesome foods, or extremely loud scream rock played at top volume out of an SUV by creepy, over-tanned old drunk men with tattoos.  Not to mention the group of shriveled, enormous, bathing suit-clad women chain-smoking in the only shady spot.
I know it sounds terribly judgmental, but if you’ve been there, you’ll know what I mean.

The culture shock made a big impression on Ethan and Mirin, who went back and forth on the way home, jokingly talking with an appalling accent and saying ridiculous things similar to what we overheard, such as, “Patton, you get yer little butt over here before I got to beat it!”  Or “You beat ’em with yer cigarette hand?  I always beat ’em with mah beer hand!”  And the classic last words, “Hold mah beer and watch this!”

Mostly we ignored the scream rock and had a lot of fun.