It has really been a long time since I’ve written here–so long that I’m not even sure what my last post was about!
Sooooooo much has been happening, I’m afraid I won’t ever be able to catch up.  Things have been going so well, but not necessarily documented and written about.  I have kept up my hand-written journal, but I have found it so hard to be on the computer this year.  The reason:  Clothilde.

She is so sweet, and so cute and so wonderful, but in short she is also a total maniac.  I mean, look at her–she is all ready to ride off down the street on her tricycle.  She never stops moving and getting into things.  Our house, long accustomed to older children, has been desperately child-proofed.  One long week of rainy days, I moved 50 lb feed bags into stacks in all the doorways.  It makes getting around the house a real pain, and isn’t very sightly.  It doesn’t even stop her.  It only took about a week before she could climb up and over them, but it slows her down enough for me to catch up.  At 10 months old, she is already able to hop on two feet, climb things (yes, climb) and take steps by herself.  She will be walking–nay, running, far too soon for her old and slightly decrepit-feeling mama. 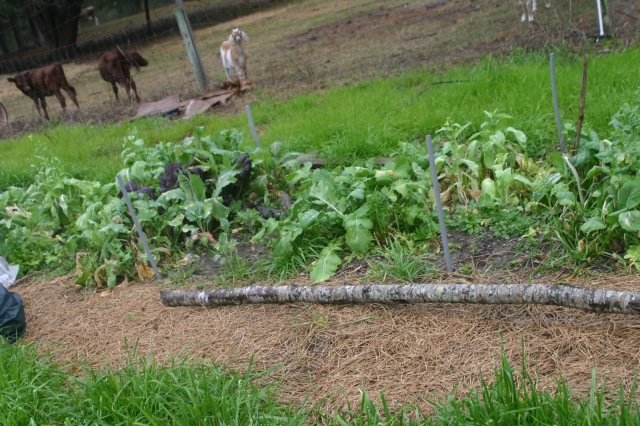 So that is my excuse.  Back to my post!
This year the garden has been fabulous.  Not the winter garden, that is pictured above.  I pulled it all out and re-planted it with potatoes.  The summer garden is the wonder garden.  It was going to be my super-simple, super-tiny garden.  Oh well!
The Permaculture beds I learned about from Susanna at Salamander Springs farm have been wonderful this year.  I worked on them all winter long, and so planting in the spring was a breeze, even with “Clonan the Destroyer,” which has been Clothilde’s popular nickname around here lately.

In march, the garden started out looking like this.  I had seeded rye and fertilized it with the fertilizer from Midwestern Bio-ag.  It turned amazingly green and lush.  We need to get our winter pastures seeded down like that!
I think this also helped control weeds.  Someone recently told me that the rye has allelopathic roots and secretes phytochemicals that keep other seeds from germinating.  The roots on it were incredible.  I just smushed it all under cardboard, compost and hay when it was around time to plant.

Here it is, all mulched and seeded!

Most of the garden started off like this, in pots, but I did direct-seed beans and corn, of course.  I do have a rabbit problem out there, and when I direct seed things, often they will get nipped off.  Giving them a start until they have a few true leaves seems to make them not as tasty.

Here was the side view with the tomatoes, peppers and eggplants.

This was the first year the potatoes did something other than die.  We actually got some really nice ones out of this plot.  It was such a nice surprise. 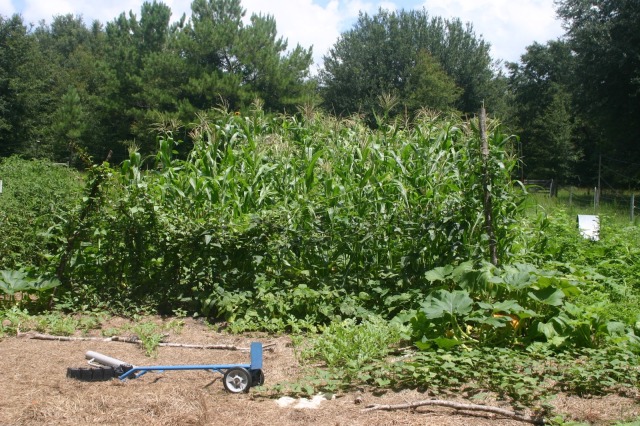 This is about what the garden looks like now!  Jungly, but different from all my other gardens in that there isn’t a weed to be seen!  I did have an army of army worms come through and try to eat everything, but I hand picked them into soapy water and eventually they gave up.

Here is a side view with the tomatoes.  The tomatoes are huge.  They are as tall as I am this year.  I unfortunately don’t have a picture of the Dudley farm corn I had planted.  It is about 10 feet tall.
For a month and a half we have been consistently eating out of the garden.  We got so many sweet peppers, it was hard to keep up with them.  We just got our first taste of sweet corn, the cow peas are ready to pick and it looks like the summer squash is getting a second wind.  Soon there will be pumpkins to pull out (some are already very large, lurking in the corn patch).  The long beans have really been producing, and I have come to really appreciate the Malabar spinach.  The other day Rose was helping me in the garden.  We were harvesting long beans and she turned to me and said, “Mama, your garden is just like a grocery store!”

It is so wonderful to have the opportunity to have a big garden.  There is a completely different way of meal-planning and cooking when you are cooking from a garden.  I love the seeming dance or parade of vegetables that weave in and out in abundance, and I feel so connected to this little spot.